It’s late September, and you know what that means!
(If you guessed my birthday, well, you’re right, but that’s not quite what I was talking about.)
It’s time to start thinking about next year’s ComicCon cosplay!
Yeah, okay, maybe it’s not for another nine months, but for those of us who work slowly and want to pay attention to detail, it’s time to begin.
Over summer break, my gaming obsession was the Portal series. I’d heard some pretty epic things about it before, but I never got around to playing it until Steam’s fourth of July sale. I saw I could get both Portal games for five bucks, so I thought, why not? It’s only five bucks either way.
It was even more awesome than I expected.
Now, this isn’t a review, this is a cosplay DIY tutorial/walkthrough/demonstration, so let’s get started.
Here’s a picture of the character I’ll be cosplaying as: 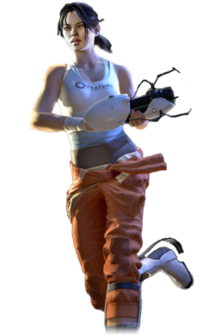 Chell is the protagonist of the Portal series; I’ll be cosplaying as the Portal 2 version of the character.

I decided to tackle the long fall boots first.
It took me a while to find a good pair of shoes to use for the structure of the boots. Target and Walmart yielded nothing; it was too early in the year to find cheap knee boots. I didn’t find adequate shoes at Payless, but I magically found a pair of gray leggings with a blue band at the top (who would’ve thunk they even made those?) and snatched them up in about two seconds.
I finally ended up going to Amazon. It took a while, but I finally found a pair of boots in the right size and color, with an accurately sized heel and platform, for only $7.

They’re extraordinarily cheap and not exactly the prettiest, but they’re perfect for the purpose.

First I had to cut off the little buckles at the top. They didn’t serve any purpose except looking pretty, so it wasn’t a problem.
Some people make their sewing and crafting patterns by measuring and eyeballing the shape. Not me. Not only are my math skills questionable, but, since the boots’ design is slick and geometric, symmetry is a must.
Instead of wearing the boot to make it hold its shape, I stuffed it with Walmart bags.

No plastic bags were harmed during the making of this cosplay. As of now, anyway.

I then proceeded to cover it with tissue paper, and then with masking (or painter’s) tape. DON’T skip the tissue paper, because if you do, your pattern will be stuck to the boot, and something is going to get torn if you try to take it off.

Using the seams as a guide, I drew two Sharpie lines down the front and back of the boot.

That’s my hand. Isn’t it cute?

And now comes the tricky part: drawing on the details. Using this reference image, I began to draw the lines that will be used to cut out each piece of the boot, carefully measuring each line to make sure they were equidistant from their respective sides of the shoe.
But seriously, curves are hard to do. The boot wasn’t symmetrical, and one side looked way better than the other.
So I decided to do the half-a-pattern technique. I’d make one half of the pattern, trace it, flip it over, and trace it again, to make a mirrored outline of the pattern. I’d cut it out, and it would be perfectly symmetrical without my having to measure a single thing.
And then came my second screw-up. Since now I was only drawing half a boot, I grossly underestimated the size of the plate on the back of the calf. And I cut the pattern off of the boot before I noticed.
I fixed this problem by taping up just the top half of the boot, cutting the messed-up part off of the finished pattern, and taping the usable portion of the latter back onto the boot. I ended up with a sort of franken-pattern.
Why am I telling you this instead of pretending it didn’t happen? So you know what NOT to do. No lasting harm was done to my cosplay (other than a wasted thirty minutes of pattern fixing), but yours will go a lot more smoothly if you don’t make the same mistakes I did.

The “finished” taped-up boot (before I fixed the undersized calf piece). Ignore the misplaced line on the bottom of the ankle piece; that was for measuring purposes only.

Once my pattern was REALLY finished up, I cut off the unnecessary taped portions (the front of the top and the toe, where the original boot will show through or be cut away) and traced it onto a piece of posterboard, adding an extra half inch or so on the edges that will wrap around the boot (namely the front of the foot and the back of the calf). I traced the lines accordingly (all except the little slit on the side of the foot, which I’ll add on later), mirrored the cutout as described above, and made a two-sided pattern. I wrapped it around the boot for size, adjusted a little, and the pattern was done!

This is a master template for the patterns I’ll need to cut the material for the long-fall boot. Since I’ll be making the boot in three pieces (the back of the calf, the top piece of the ankle, and the bottom piece of the ankle and foot), I’ll need to use this pattern to create the others.
The next step is to create the smaller patterns and find out how much material I’ll need for each.
Stay tuned for more updates on my project!

What do you think? Share your thoughts! Cancel reply